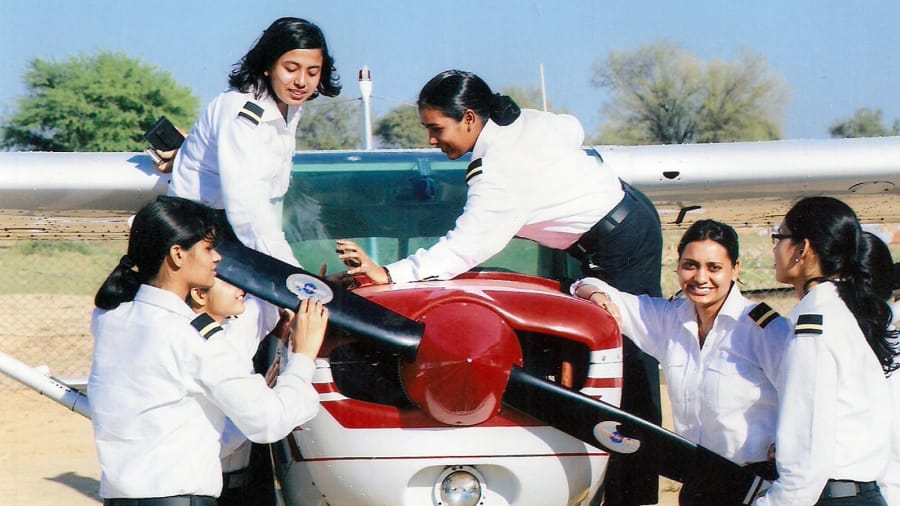 On a dusty, 3,600-foot-long airstrip in Rajasthan, India, a two-seater white Cessna 152 pivots into position. A few moments later, it’s soaring over the empty desert into a cloudless blue sky.
This is the private runway at 1,100-acre Banasthali Vidyapith — one of India’s premier women’s universities.
Since its establishment in 1962, the university’s School of Aviation has produced more than5,000 alumnae, with dozens more in the pipeline.
“In a country where many people don’t want to invest in girls, which is the mentality of most traditional families, Banasthali Vidyapith creates a place where women are equally important,” Captain Tarana Saxena, a recent graduate, tells CNN Travel.
“They give girls a chance to learn about aviation … a chance to fly.”

A big step for women

In 2016, Indian Minister of Defence Manohar Parrikar congratulates the Indian Air Force’s first three female fighter pilots: Bhawana Kanth (L), Avani Chaturvedi (C) and Mohana Singh.
NOAH SEELAM/AFP/AFP/Getty Images
The inspiration for Banasthali Vidyapith University sprung from tragedy.
Founder Hiralal Shastri, a politician who was born into a peasant family in Rajasthan, relocated to the village of Vanasthali in 1929 with his family.
In this rural outpost, about 50 miles south of Jaipur, he founded a social program to reconstruct the village and educate local farmers.
At a very young age, his daughter embraced his passion and began holding classes for village children.
Tragically, she fell ill at the age of 12 and passed away.
Related content

Trekking with the traveling sisters of India

Encouraged by his wife, Shastri set out to educate and empower young women, a dream they had envisioned for their own daughter.
And so Banasthali Vidyapith opened in 1935 with seven students — all girls — and now offers more than 28 disciplines, including doctoral degrees.
“Having access to education was a big step for women in India,” says Saxena.
“The idea was not to keep girls separate from boys, but to give girls a chance to evolve — to excel in something, to learn, to evolve their minds.”

The university introduced its Gliding & Flying Club in the 1960s.
Courtesy Banasthali Vidyapith
At Banasthali Vidyapith, the curriculum is based on the concept of “Panchmukhi Shiksha,” which the university describes as the “harmonious development of personality.”
The university offers a wide range of departments, including law, design, science, nanotechnology and literature.
It introduced its Gliding & Flying Club with a fleet of five aircraft in the 1960s, when only a handful of female pilots existed in the world.
At first, the aviation training was intended to help women build confidence as part of the schools holistic program.
It evolved into a School of Aviation, where women could later pursue a student’s license, bachelor’s degree or a commercial pilot’s license.
“They give girls a chance to learn about aviation … a chance to fly.”
Captain Tarana Saxena
Even for those who wish to acquire a student pilot’s license, rather than pursue aviation as a career, Banasthali provides 5-10 hours of free flying lessons.
“At a time when it was considered unreal and absurd for women to drive cars in the country, we were teaching girls how to fly,” Aditya Shastri, grandson of founder Pandit Hiralal Shastri, tells CNN Travel.
Over the years, the aviation school has since turned out many of India’s top female pilots, including Avani Chaturvedi, whom the country celebrated as its first female fighter pilot in 2016.
Chaturvedi made history again in February, when the 24-year-old became India’s first woman to fly a fighter aircraft solo.

A patch of turbulence

Captain Tarana Saxena poses with beside a Cessna at Banasthali Vidyapith University.
Tarana Saxena
Growing up in the town of Bilari, in Uttar Pradesh, Saxena has had her eyes on the sky ever since her parents gave her a toy airplane when she was about five years old.
“Even though the toy couldn’t actually fly, I remember playing with it, and wondering how these things stayed in the sky,” says Saxena.
She lived in a town where there was no airport, not many people spoke English and it was a big deal if a girl rode a bike.
“Luckily, I grew up with parents who supported me,” says Saxena. “One day my father saw an ad for the flying club in the newspaper and he applied for me, when I was still in boarding school [high school].”
But pursuing aviation isn’t easy. For starters, it’s expensive. At least 200 flight hours are required to achieve a commercial pilot’s license and each hour costs Rs10,000 ($135).
In total, the license will cost roughly 20-35 lakh Indian Rupees, or about US$28-47,000, though the university provides scholarship programs.
“Banasthali is trying to nurture more women leaders in aviation,” Professor Seema Verma, dean of the School of Aviation, tells CNN Travel.
“A lot of Indian parents don’t want to spend so much on training for their daughters. There are exceptions, of course. Some parents have dreams (for their daughters) in sync with our mission.”
Saxena says her parents — her mom, a doctor who works with unprivileged people; her father, a professor — endured an onslaught of judgment from neighbors, who questioned their investment in a girl.
“We live in a society where people judge — why are you spending so much on your daughter? Why are you letting your daughter to that? Girls can’t drive. How can they fly?”
Saxena’s parents encouraged her to ignore the noise and follow her dream.
“No one in my family was ever in the aviation industry. But my parents wanted us to be whatever we wanted to be — my sister wanted to be a doctor, she is a doctor. I wanted to be a pilot, I am a pilot.”
“At a time when it was considered unreal and absurd for women to drive cars in the country, we were teaching girls how to fly.”
Aditya Shastri

When Saxena moved to Banasthali in 2012, she couldn’t wait to take her first flight.
In December 2013, the day finally arrived. An instructor accompanied her as she settled into the cockpit of a Cessna 152A, a common training aircraft.
“I remember my instructor warned me that I might feel dizzy or a little nauseous, but I didn’t feel anything but excitement,” says Saxena.
“I couldn’t believe how amazing it felt to be in the air. I wanted five more minutes, 10 more minutes…I wanted it to last forever.”
She says flying felt exactly the way she imagined it.
“It’s rare to dream about something, then have it come true.”
She earned her Bachelor’s degree in Aviation Science followed by a commercial pilot license, which required a series of eight exams, in about five years.
After graduation, Saxena says she fielded job offers from Spicejet, Air Asia & Vistara and, this year, secured her dream job at IndiGo.
“I chose IndiGo because it has the Airbus 320, which I prefer to fly, and it has the female factor — Indigo employs the highest number of female pilots in India (with 14%). Everything at the company is based on merit.
“I do not represent a phenomena of any kind. I just hope that having more women pilots in India can change perceptions (about gender). How does gender determine one’s abilities?”

Road to the skies

IndiGo airline employs the highest percentage of female pilots in India.
PRAKASH SINGH/AFP/AFP/Getty Images
It was unusual to see a woman in a cockpit in India when the university started its on-campus aviation school in the 1960s.
Today, roughly 5%of commercial pilots worldwide are women, according to the Centre for Aviation.
In India, 12% of the country’s pilots are women — the highest percentage in the world. That’s roughly three times the proportion in the US, where just 4% are women.
Harsh Vardhan, founder of Starair Consulting and an expert on India’s aviation industry, says the momentum started after post-independence from Britain in the 1950s.
“In the past, we come from traditional mindset, so not many women were really coming out for jobs,” says Vardhan.
“They weren’t pursuing aviation as a career — they were more housewives and preferred to work in sectors like education and in a secured environment.”
Related content

He says former prime ministers like Indira Gandhi — India’s first female prime minister — played a major role in encouraging women to come forward, as did her son, Rajiv Gandhi.
“It’s the role models that create the success stories and then others start following,” says Vardhan. “Women like Kalpana Chawla, the first female astronaut from India, are a great inspiration.”
Today, Vardhan estimates there are more than 2,600 women flying for private airlines, as navy and helicopter pilots, and in other aviation related capacities across India.
“Now women can learn in all flying institutes across the country, but Banasthali Vidyapith is one of the prime institutions that has been in the forefront of women’s education in India,” says Vardhan.
“In another five or 10 years, you are going to be looking at this ratio up to 20% or more. It will take time, but it will grow when we choose pilots based on merit.”
-CNN Travel 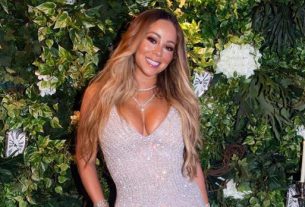 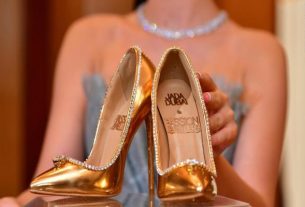 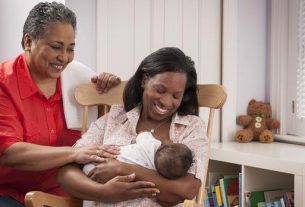 Which should you choose: A nanny or creche?